Most are probably aware that Don Dickinson, one of our founder members and a Trustee of the Club died recently, aged 86. A private Cremation will be followed by a Service of Thanksgiving at Oswestry Methodist Church on Monday, July 25, at 3.30pm. Family flowers only. Donations if desired to Christian Aid. All inquiries to DAVID DAVIES & SONS Telephone 01691 653116.

Don was a very practical person and helped with numerous projects at the Club through the years. Often the first person members turned to for boat maintenance advice. He was also always at the forefront of technology and I particularly remember him being one of the first members of the Club that had an email address and I regularly chatted to him about computer stuff. For many years, together with Jim Wilson, Don used to collect together CSC news articles and using Windows 98 and Microsoft Publisher, produced and printed the paper copy of the Club Newsletter. I must add, that I think Don’s wife, Barbara, did the proof reading.

During the time I knew Don, he sailed a Solo but I’m sure he sailed many sorts of dinghies throughout his sailing years. He was sailing regularly during his seventies and joined in the races, both on Sundays and Thursday evenings. I’m fairly certain he was sailing up to his 80th year but then regretfully, he decided ‘he had better hang up his mainsheet’.

I’m sure that others in the Club could recount stories of Don’s many talents.

Don and his wife Barbara were made Honorary Members at the Club’s 50th Anniversary celebrations in 2009 and they were the ‘Guests of Honour’ on the day. I think it is worth re-publishing the letter that Don sent for inclusion in the Club Newsletter. 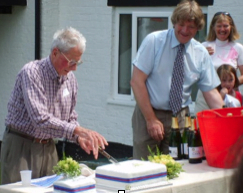 As the oldest, and as far as I know, the only surviving founder member of the Sailing Club I want to record my appreciation of the celebration that took place on Sunday 28th June 2009. Although health considerations now prevent me from active sailing I still have a great interest in the Club and its activities.  As a supernumerary trustee I try to attend some meetings of the Committee and under suitable weather conditions come to watch the sailing and meet old friends.

The arrangements made for the celebration were impeccable and we must congratulate the Commodore Ian Ramage and Felicity and his team headed by Mike Brain on the outstanding success of the celebration.  Even the weather was kind, Mike Brain had assured me that the Commodore had this matter in hand, and he had! A little more wind around capsize might have been some help to the sailors in the Anniversary Prize Race, but then that is the Colemere we have known and loved for 50 years.  Sitting in a ruck of boats waiting to round a mark can be frustrating but it teaches one patience or to keep out of the ruck and try to find a spot where there is enough wind to keep you going even though it might not be in quite the right direction

Seeing the boathouse as it now is takes me back to 1959 when I was first taken down to the Club by Jack and Bernard Thomas. The premises had been vacant for some time and previously had been occupied by squatters.  All the small band of founder members gathered for the working parties which started in earnest in 1960.  By this time the kitchen and ladies toilet had been provided with the very basic facilities. There was no mains running water; water to flush the toilets had to be pumped by hand out of the well near the starters box into a tank in the roof.  Drinking water had to be carried from the pump in the village.  There was no electricity and we had a basic system of Calor gas lighting.  At that time we had only the small compound adjoining the boathouse and car parking was at the top of the lane on the site which was the overflow car park for the celebrations. I and others not afraid of heights were detailed to work from a rudimentary scaffold of trestles and planks to clear the accumulation of years of neglect and paint the roof. What happened to Health and Safety regulations??

A chain link fence on steel posts was erected on what we thought was the boundary of the compound.  Unfortunately we got it wrong and the natives became hostile.  The fence was obstructing the public right of way and the equestrian fraternity objected to the barbed wire on top of the posts which posed a hazard for horses and riders. An emergency working party was conscripted to dig out and re-erect the posts to give room for pedestrians and the odd horse to pass the compound.  The bank near the entrance gates was excavated to flatten the path.   It was about this time that the L
ocal Council decided that the Sailing Club had not got the appropriate permissions.  As Secretary I had the job of sorting out the problem which as a Local Authority officer I was able to jump through the appropriate hoops and resolve the matter without ruffling too many feathers.

During the first sailing season it became apparent that there were many people interested in sailing and the boat parking and car parking facilities were inadequate.  We negotiated with the local farmer and with the blessing of the land owner, the Duke of Westminster, and arranged to lease the present dinghy park and car park.  Much later the Shropshire County Council acquired the Colemere Estate and we were able to secure the boathouse and sailing on the mere for the next 50 years.

When we arrived at Colemere on 28th June we were received by the Commodore and his lady and given our name tags.  It was then that Ian asked me to cut the Celebration Cake, as I don’t  do speeches I agreed to cut he cake on the condition that I would not be required to make a speech.  I was somewhat taken aback when before cutting the cake Barbara and I were awarded Life Honorary Membership.  On reflection it now appears somewhat churlish of me not to have said a few words of thanks to the Club.  In the last 50 years Colemere has been a refuge from the stresses of the daily work and where I was known to all as Don.  The first Commodore Maurice Curtis insisted that everyone should be known by their Christian names and that like sailing in wellies the prefix Mr. was forbidden.

Once again many thanks to the Commodore Ian Ramage and his team for a perfectly organised day when we were able to meet old friends.