Colemere Sailing Club can now offer even more, and improved, sailing opportunities to the local community after the RT Hon Owen Paterson MP, Secretary of State for Environment, Food and Rural Affairs, officially opened their new £30,000 launching and safety facilities. 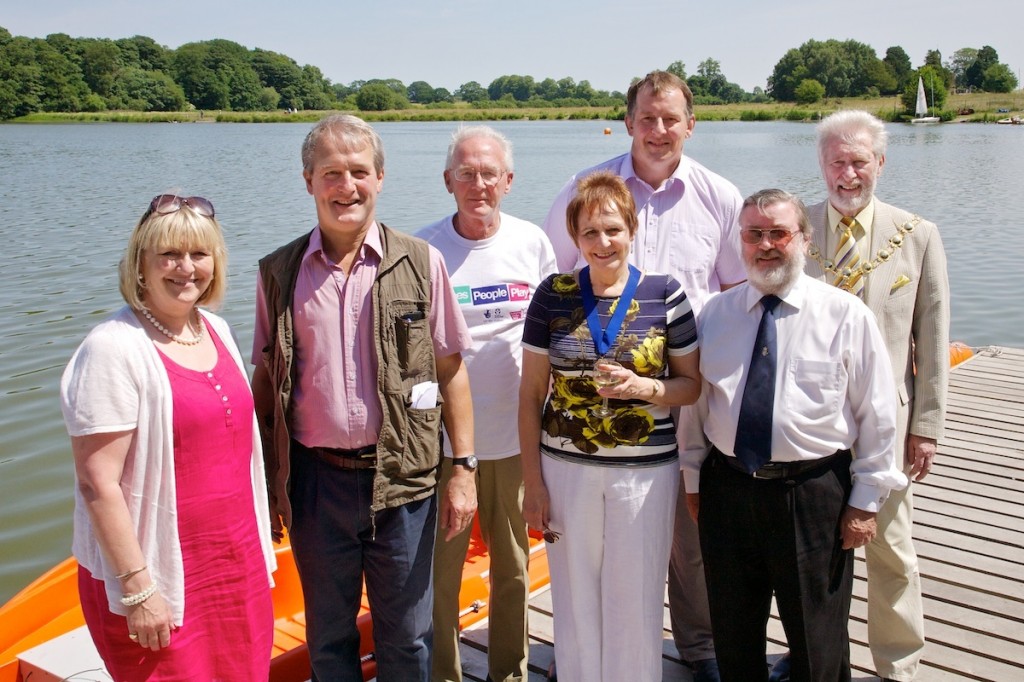 The Ellesmere club, which has been sailing on the mere at Colemere since 1959, caters for serious sailors, racers, improvers and families wanting to introduce their children to the sport. The launching and safety improvements, include new purpose built jetties and two additional rescue boats, meaning the launching and recovery of boats is now easier, while the added safety boats mean the club can run more activities at the same time.

Colemere SC received £31,000 of National Lottery funding through Inspired Facilities, part of the £135 million Places People Play legacy programme that is bringing the magic of a home Olympic and Paralympic Games into communities across the country.

Mr Paterson officially opened the facilities and named the two new safety boats, Wenlock and Mandeville, after the London 2012 mascots. He said: “I’m always encouraging local organisations to apply for lottery funding and was delighted to see funds coming to North Shropshire for such a worthwhile project.”

Following the opening ceremony the guests watched a sail past of racing boats and Mr Paterson officiated in the start of the second race of the day.

Hugh Farrington, Colemere SC Commodore, said: “The completion of the project was the conclusion of a restoration of the club that had commenced with the purchase of the clubhouse building by the members and securing of a 50 year lease on the Mere in 2007.Since then the clubhouse has been much improved. The first generation of sailors at Colemere had established a successful club and now the current generation has secured the future for the next and future generations.”

Cllr Hartley added: “I was delighted to attend the event, which demonstrated the firm commitment we have in Shropshire to sport and the continuing legacy from London 2012.  It is always good to see facilities improving the quality of their offer for local people and I wish the club all the best for the future.”

After lunch the guests were escorted by Hugh Farrington to see Colemere from the water in one of the new safety boats, and to view the rare Least Water Lilies, which give the Mere its status as a Site of Special Scientific Interest.

Gareth Brookes, RYA Midlands Regional Development Officer, said: “When Lord Coe talked about the post-London 2012 ‘legacy’ these are the sorts of projects that will hopefully provide the foundations and the opportunities for more people to get involved in sailing in Shropshire for many years to come. One of the best things about sailing is there is always something new to learn, which really lends itself to a lifetime of enjoyment on the water.”

For more information about everything going on at Colemere SC this year visit www.colemeresailing.org.uk or email Mike Brain (Membership Secretary) at

·         The RYA is the national body for all forms of recreational, competitive and professional boating.  It represents dinghy and yacht racing, motor and sail cruising, RIBs and sports boats, powerboat racing, windsurfing, inland cruising and personal watercraft.

·         The RYA is recognised by all government offices as being the negotiating body for the activities it represents. It continually fights for the rights and freedoms of its 102,000 personal members, the majority of whom choose to go afloat for purely recreational non-competitive pleasure on coastal and inland waters. There are an estimated further 500,000 boat owners nationally who are members of RYA affiliated clubs and class associations.

·         The RYA also sets and maintains a recognised standard for recreational boat training through a network of 2,340 RYA Recognised Training Centres in over 43 countries. On average 155,000 people per year complete RYA training courses.

·         The RYA is committed to promoting all forms of boating and making them accessible to everyone.

·         Love Boating?  Then why not join the association that promotes and protects, safe, successful and rewarding British boating.  Join today and support the RYA in protecting your boating rights and freedoms.  Take advantage of free advice and support on all aspects of your boating, as well as enjoying a range of fantastic personal member offers.  Find out more by calling 0844 556 9556, email member.services@rya.org.uk