The forecast was strong winds and fierce gusts, and that’s what we had. We’d set a course but there were no takers for racing, however two brave souls (Tom and Paul) declared themselves up for taking the club Picos out. They were ‘encouraged’ by a number of experienced sailors (the Committee had just finished meeting) hoping for shoreside entertainment and offering words of wry wisdom but declining to take to the water themselves. Both boats were rigged and Tom was first to launch, as soon as it left the trolley the boat capsized, uprighted, capsized the other way and generally misbehaved. Tom managed to get aboard, harnessed the beast and charged off towards the windiest bit of the lake between Bay and Capsize. Here he proceeded to entertain the shore crowds (who by now were spectating from the shelter of the club house) with a dramatic acrobatic routine involving a lot of spray and a particularly spectacular nose dive. His finale resulted in the boat turning turtle and the mast sticking in the mud. Paul with his Pico rigged and ready to go was still on shore, and very sensibly stayed there *. Bob and Clare standing by in the big rescue boat took the Pico in tow. Tom had had enough,  still in the water he managed to unclip the sail and then climbed aboard the rescue boat for a breather. The Pico without Tom at the helm reverted to the bucking bronco behaviour it had displayed at the slip, capsizing, flipping, wallowing on it’s side, then flipping again. Rob Sears appeared in the small rescue boat to take pictures but soon found himself part of the action as the flotilla was being blown onto the lee shore by the incessant squalls that were piling through. Bob gave it a bit of wellie and started to pull the Pico (at this point lying on it’s side uncharacteristically docile) away from the trees, Rob matched the speed (think in flight re-fuelling) with Tom by now in the small safety boat hanging off the bow removing the rudder and then managing to get the Pico upright as we gradually pulled away towards the more sheltered side of the lake. Helm and boat were returned safely to shore, we all had some good boat handling practice and blew away a lot of cobwebs!

A short video from Rob’s phone before he joined in the “rescue” and a pic from Helen taken just as Tom set sail. 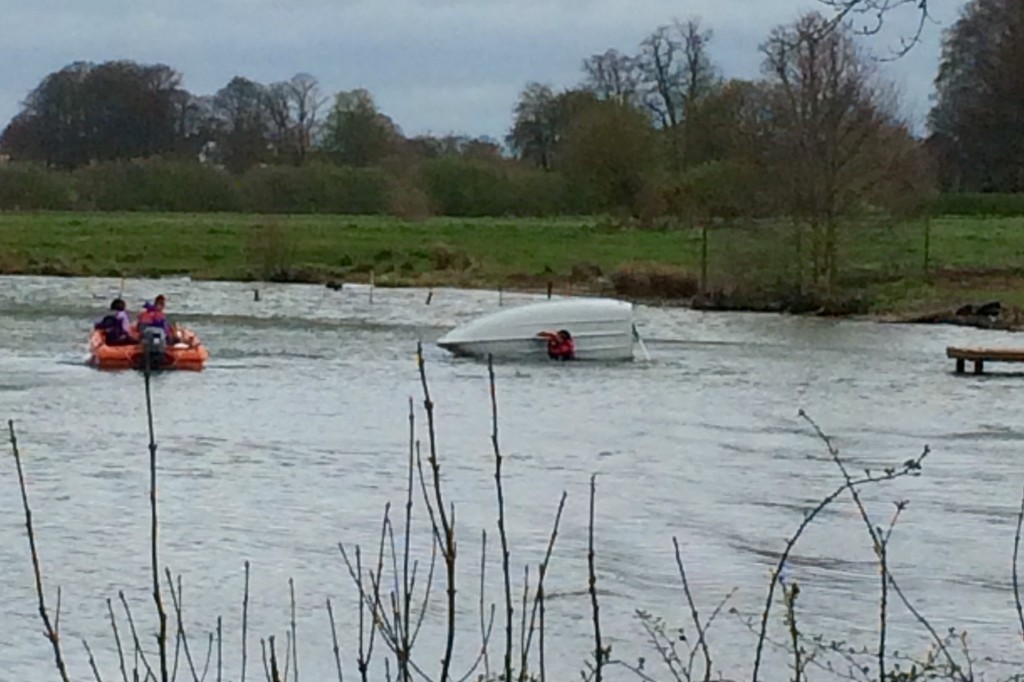 I actually did venture onto the water for a very short sail. I have some witnesses who watched me from the dinghy park. I didn’t travel very far, but did just about manage to return to shore, without capsizing (for once). Bob, Clare and Rob in the safety boats, had more pressing matters at the time, dealing with Tom’s antics.

P.S. Myself and Mike Harris caught the fleeting flash of a kingfisher this morning, along the edge of the mere. Quite close to the Clubhouse.